Torah law forbids the transportation of objects in a public domain or between a private domain and a public domain on the Sabbath. The Torah rules include various definitions of what constitutes such areas: A private domain consists of an enclosed area and a public domain is a large enough open area regularly frequented by masses of people. Thus, there would be no Torah restriction on carrying in areas where there is no public domain. None of this is explicitly stated in the Torah, but the oral law (Torah she be’al peh) codifies these matters as Torah-derived (d’oreita) rules.

In order to insure that no one could mistakenly violate the torah-status laws for observing the Sabbath, the Rabbis (Chazal) greatly restricted the type of area in which carrying would be permitted.

The following are two relevant examples of such restrictions:

2) The area must be a single residence or under a single ownership. 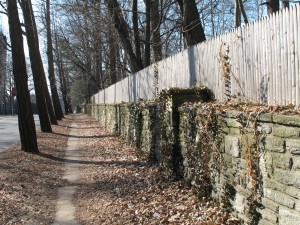 This wall on City Avenue is the Eruv. Obviously, the sidewalk is outside of the Eruv, and therefore can not be used while carrying objects on Shabbat

In Lower Merion, we have enclosed the area indicated on the map that can be found by following the link on this website. Fences, walls, as well as natural boundaries such as steep hills, cliffs, and deep channels, can be utilized when constructing an Eruv. 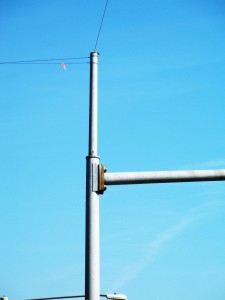 This pole is one side of a tzrurat ha-petach consisting of two poles with a wire passing directly above both. In this case, since the wires that go off to the left are fastened around the pole directly above a wider section of pole, the wire is considered to be directly above the pole.

The main structure that serves to enclose the area, however, is the “door frame” (tzrurat ha-petach.) This structure consists of two vertical posts (lehis) and a wire or string that spans from above the top of one to above the top of the other. In Lower Merion, a utility wire often functions as part of the tzurat hapetach, and the lehi consists of a plastic strip attached by the Eruv Corporation to the utility pole from under the wire to the ground. 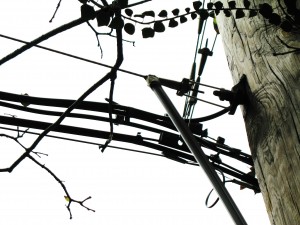 In this case, a plastic Lechi comes from the ground directly beneith the utility wire. The lechi is the diagonal piece that comes up from the bottom right, in the picture

The proper procedures for what constitutes a valid enclosure can become quite complex and there are various possible approaches; therefore it has become standard practice to choose an expert as supervising Rabbi (Rav Hamachshir) when a large area is to be enclosed. The enclosure is colloquially called the “eruv”.

To create the common ownership/residence, the Eruv Corporation has followed a two step procedure. The corporation rented from Lower Merion Township the entire area enclosed by the “eruv”. This act provides formal access to all public and non-Jewish owned properties, as well as to the property of any Jew who rejects participation in the “eruv.” 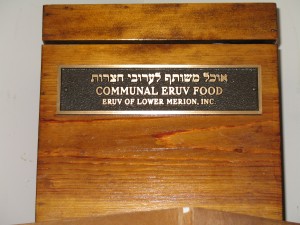 The Communal Eruv Food box is located in the coatroom of the Lower Merion Synagogue, the largest synagogue within the eruv.

In addition, we have designated food for a common meal for all the Jewish residents within the area of the “eruv” and placed it in a location accessible to all, in this case in a wooden box in the coat room of the Lower Merion Synagogue. This common meal—a box of matzot—combines all the Jews in the area as sharing residence in one common property, fulfilling the second requirement. This meal is called “eruvei chatzeirot”, combining of courtyards, hence the colloquial use of term “eruv” for the enclosure itself.
(In principle this food belongs to all and anyone is permitted to take it and consume it at any time. However, should you decide to exercise this right, please refrain from doing so during the period on Friday from sundown until the stars come out, and please let us know so we can replace the food in time for the next Shabbat.)

Some authorities, based on the Rambam, maintain that to make extensive use of tzurot ha-petach, there is an additional requirement called “omed m’rubeh”, meaning that the actual partitions on the boundary of the enclosed area, exclusive of “tzurot ha-petach”, must constitute at least half of each side. The significance of this requirement is that it renders 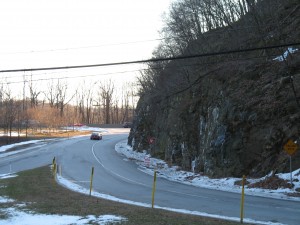 This rock constitutes a natural wall for the eruv. It is located by the Schuylkill Expressway.

the enclosed area a Torah private domain even though carrying would still be rabbinically prohibited without the tzurot ha-petach to fill in large gaps. In modern practice this extra stringency is not generally considered essential. The Rav Hamachshir of the eruv of Lower Merion has ruled that our eruv as presently constructed does satisfy this further condition. 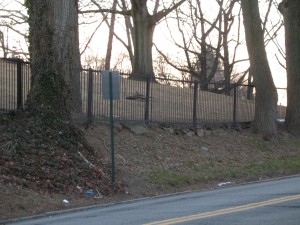 The following fence is utilized by our eruv, at the border of the West Laurel Hill Cemetery.

There are lots of disagreements on the subject of eruvin. Major halachic authorities have held widely differing positions even about such basic matters as what constitutes a public domain. For example, it was common in Europe before the holocaust to construct eruvin, and most towns and cities in Israel also have them. However, many important halachic authorities of the mid 20th century maintained that eruvin could not be properly constructed in most major metropolitan areas in North America. 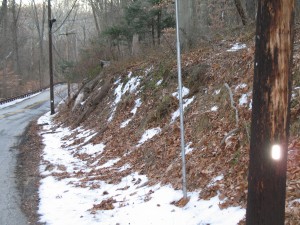 The following hill is utilized as part of the eruv. In halachic terms, it is called a tel-hamitlaket, an incline of 25 degrees that can be utilized as a wall.

The majority opinion began to shift during the latter part of the last century, and eruvin have become widely accepted and are now commonly found wherever there is a substantial observant Jewish community. The major halachic authority, R. Moshe Feinstein, indicated the proper etiquette regarding disagreements in his responsum on the possibility of constructing an eruv in Manhatten. In this extensive discussion, he concluded that an eruv cannot be constructed in Manhattan. He then wrote that if some other authority should rule differently, as has in fact happened, no one should protest (“ein limchot b’yadam” meaning “do not protest their action”), because they too are qualified to make halachic rulings (“ gam hem reuyim l’hora’ah”).